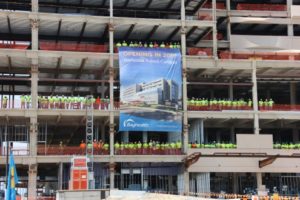 On Tuesday, July 11, Bayhealth celebrated a milestone in the construction of the new Bayhealth Hospital, Sussex Campus with the ceremonial “Topping Out” of the steel structure. Located in Milford, the 440,000 square foot hospital is slated to open in early 2019.

“This day takes us one step closer to fulfilling the promise we made to southern Delaware,” said Bayhealth President and CEO Terry Murphy, FACHE. “Put simply, that promise is to bring the nation’s best healthcare to our families here at home. These new facilities are just part of what Bayhealth is doing to make the Bayhealth Sussex Campus a great place to give and receive care for many generations to come.”

“Bayhealth is a leader not just in healthcare, but in driving economic growth in Kent and Sussex counties,” said Governor John Carney. “The investment in this new, state-of-the-art facility will expand access to quality healthcare for children, seniors and Delawareans across the central and southern portion of our state. It will create good-paying jobs, help us attract more businesses to set up shop here, and make the Milford area an even better place to live, work and raise a family. The positive impact of this $300 million investment would be really difficult to overstate.”

More than half of Bayhealth’s contractors and subcontractors are Delaware-based businesses and more than half of the projects materials will be purchased through Delaware vendors. In fact, the approximately 6,750 pieces of steel used in this project were purchased from and fabricated by Crystal Steel, Inc. of Delmar, Delaware.

The “Topping Out” Ceremony is a long-standing tradition in construction derived from an ancient Scandinavian builder’s rite held when the highest beam is fastened atop a structure.

Community members, patients, physicians, employees and donors had an opportunity to leave their mark on history by signing the 13-foot long, 200-pound ceremonial beam at Downtown Milford’s Bug and Bud Festival. The beam was also available to sign on the Bayhealth Sussex Campus and in the lobby of Bayhealth Milford Memorial.

“The next few years hold a lot of promise for Milford and its surrounding areas,” said Mayor Bryan Shupe. “The Bayhealth Sussex Campus and the redevelopment of the Clarke Avenue facility will serve as a catalyst for economic growth. We expect to see our existing businesses get a boost, and hopefully we’ll see the launch of new businesses—both small and large.”

Designed by architects from CannonDesign, the innovative campus will include a six-story hospital with an expanded emergency department, additional operating rooms, and all private patient rooms. As this is more than a hospital, there will also be a 70,000 square foot outpatient center allowing for additional services in one easy to get to facility.

Nemours Children’s Health System will provide specialized services for children and seniors in a separate building on the Bayhealth Sussex Campus.

In March, Bayhealth announced it reached an agreement with Nationwide Healthcare Services for the sale of the grounds that currently house Bayhealth Milford Memorial on Clarke Avenue. Nationwide plans to transform the 22-acre site and surrounding buildings into an innovative multi-use healthcare-focused community. The agreement follows through on a commitment Bayhealth made in November of 2014 to find a buyer that could repurpose the property into a viable community resource once Bayhealth relocates to its new campus off of Delaware Route 1, near the corner of Cedar Creek (Route 30) and Wilkins Road.